Borealosaurus (name meaning "North-Wind Lizard") is a genus of titanosaurian sauropod dinosaur that originated during the Early Cretaceous period in what is now Asia and Europe.

A small herd of around seven Borealosaurus were encountered in the episode "Dinobirds" and brought back to the park from China of 125 million years ago. They reside in Sauropod Savannah with their fellow sauropod relatives.

Borealosaurus lived in northern China during the Early Cretaceous period, over 120 million years ago. The shared their environments with Incisivosaurus, Mei long, and were accompanied by Microraptor.

It was first discovered in 2004 and named in honor of Swedish paleontologist Carl Wiman, who named the first Chinese dinosaur.

As a member of the sauropod family of dinosaurs, despite being small compared to larger sauropods, like Brachiosaurus and even Argentinosaurus, Borealosaurus was still one of the largest dinosaurs that ever lived on Earth. Standing about 20 feet (6 m) tall at the hips, measuring 60 feet (18 m) long, and weighed 20 tons (40,000 lbs.), these were magnificent dinosaurs. They could crash through vegetation and it would take a lot to stop them.

Much like most other sauropods, the body design of Borealosaurus was that of a horizontal shape.

Like all sauropods, Borealosaurus lived in herds of dozen of individuals. Borealosaurs were harmless vegetarians unless they treaded on anything in their path. Large animals like these; they wouldn't normally live in dense forests. Ergo, they would normally be out in the large plains and grasslands.

Like all sauropods, Borealosaurus could not chew their food, therefore, they often had to eat stones and used them to grind down the food in their stomach. 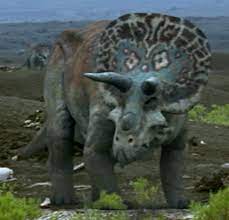 Retrieved from "https://prehistoric-earth-a-natural-history.fandom.com/wiki/Borealosaurus?oldid=18100"
Community content is available under CC-BY-SA unless otherwise noted.