Small carnivore with crest on nose

Small; a crest on snout

Ornitholestes (name meaning "Bird Thief") is a genus of theropod dinosaur that originated during the Late Jurassic period in what is now North America. Around 2 meters long and weighing 80–100 kg, they were rather small dinosaurs. They were the ancestors of dinosaurs like Utahraptor.

In the episode "Time of Giants", Ornitholestes was encountered several times by the team. However, a pair of them were brought back to the park from Late Jurassic Colorado, 150 million years ago.

Ornitholestes lived during the Jurassic Period from 154–145 million years ago. This dinosaur lived in the same place and the same time as many of the giant Jurassic dinosaurs like Dryosaurus, Diplodocus, and even the mighty Allosaurus. Discovered at the beginning of the 20th century, Ornitholestes was the first theropod to be discovered in the 1900s.

Ornitholestes was a small predatory dinosaur only the size of a man, about 6 feet (2.2 m) long, approximately 3–4 feet tall, and weighed around 45 kg. It was also closely related to the dinosaurs the one day evolved into birds.

Ornitholestes also had a thin but agile body frame, long legs and forearms, and a thin, long skull equipped with very large eyes. They were moderately fast and agile creatures.

Ornitholestes lived in the forests of the Jurassic and normally hunted small lizards, birds, and mammals, but a dinosaur hatcheling was an extra treat. And female Ornitholestes were overprotective of their nest, enough so to scare off even a two-year-old Allosaurus.

Ornitholestes also hunted and lived alone or in pairs. Though it shared its environment with the titans of the Jurassic, like the giant sauropods, Stegosaurus, and even the large predators Allosaurus, Ornitholestes most likely stayed away from these animals and focused on hunting small animals and baby dinosaurs.

Ornitholestes was an aggressive stalker, stalking their prey through the woods, and could be easily provoked into attacking. They also usually, when attacking small groups, tended to go after the smallest member under the calculation that it would be the weakest and easiest prey. 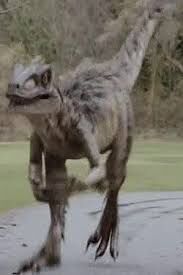 Retrieved from "https://prehistoric-earth-a-natural-history.fandom.com/wiki/Ornitholestes?oldid=17790"
Community content is available under CC-BY-SA unless otherwise noted.