Throughout North and South America

Smilodon (name meaning "Knife Tooth"), also called the Saber-Tooth Cat as well as previously and mistakenly called the Saber-Tooth Tiger, is a genus of large predatory saber-toothed cat that originated during the Pleistocene epoch in what is now North and South America. Defiantly the most famous prehistoric cat of all time, Smilodon is recognized for their two large, saber-like teeth, as its name suggests. Measuring 3 meters long and weighing over 300 kg, this is the largest and most powerful saber-toothed cat. Originally from North America, Smilodon crossed the land bridge from North America and came to South America, becoming an apex predator that replaced the native Terror Bird Phorusrhacos as the top predators.

One of the primary creatures for the park, a whole pride of S. populator was rescued from South America of 1 million years ago in the Series 3 episode "Saving the Sabre-Tooth". All of them, including their leader Half-Tooth, reside in the Sabre-tooth Rock exhibit. One of the park's iconic animals, they also have a rock structure to view their home. A pair of S. fatalis were rescued from North America 10,000 years ago. At one point, a single male S. gracilis followed the team through the Time Portal from Mexico 30,000 years ago.

As they spread down to South America, they were fast taking over from Phorusrhacos. Smilodon was fierce enough to terrorize the Terror Birds. Smilodon were very successful predators, among the top predators of the Ice Age, and survived up until as recently as 10,000 years ago. Over time, the world around them changed too much: the climate became cooler and drier and the larger prey they specialized in killing, such as Toxodon and Macrauchenia, disappeared. Therefore, the saber-tooth world came to an end.

Smilodon was first discovered in 1842 by Peter Wilhelm Lund. Although it was their original name, thus they were commonly known as the Saber-Toothed Tiger, Smilodon was not at all closely related to the tiger or other modern cats. Ergo, there is now no such thing as a Saber Tooth Tiger. The correct name for these beasts is Saber Tooth Cat. The genus includes the well-known North American species S. fatalis, found in large numbers in the La Brea tar pits, but the largest species is S. populator from South America. S. gracilis is found in Mexico. Saber-Tooth Cats are the most famous of all prehistoric felines. It is possible that the Smilodon were wiped out also by humans along with many megafauna animals.

There have been many different species of Smilodon. At around 100 kilograms, the smallest is S. gracilis, whereas the largest, at over 500 kilograms, is S. populator. Weighing about 300 kilograms, S. fatalis is somewhere in the middle. Females had large, stocky front legs and that's because of the large animals, like Toxodon and Macrauchenia, that they had to bring down. As a result, Smilodon was a very large, very solid cat, built to wrestle their prey into submission rather than to chase it down. Powerfully built, Smilodon possessed large, deadly saber-teeth that it used to kill its prey by crushing its throat, and it was capable of running at immense speeds of approximately 60 kph (37 mph). However, despite their speed and power, Smilodon were not built to chase down small and fast-moving deer or gazel-like prey.

Their saber-teeth are awe-inspiring. And paleontologists are fairly certain about how Smilodon used them. One devastating bite to the throat of their prey and their saber-teeth sliced through all the major blood vessels, simultaneously severing the blood supply and the jugular, and therefore strangled and crushed the windpipe. That meant the prey couldn't attack back, couldn't kick them with hooves, couldn't injure them at all. One single bite and the prey was dead. Those Sabre–Teeth were a really ingenious killing technique, but only when the prey was totally subdued are the famous sabers drawn. They were extraordinary precise and accurate tools for killing.

But these were the original double-edged swords. The lethal 20-centimeter sabers were actually quite fragile. Since they could not bite into bone, Smilodon could only eat the fleshier parts of a carcass. It's those huge incisor teeth that made the Sabre Tooth Cat such a successful, specialized killer.

Some scientists today theorize that Smilodon lived and behaved in an almost identical way to modern African lions. For example, Smilodon lived in tightly–knit clans. Male Smilodon could take over clans at the age of four years, the females did at least 90% of the hunting, and males doing most of the inner-breed fighting. Though they typically hunted in packs, a single Smilodon was just as dangerous as a pack of them. Like many predators, they would typically go for easy prey and would pick off any who strayed from the group.

Smilodon also used similar techniques as lions to hunt prey. When hunting, the females hunted together as a pack, inching forward to set the trap. They would stalk animal herds for up to two hours if need be. Gradually, they fanned out with the lead female moving wide – trying to encircle their prey. Smilodon were powerful killers and these cats were able to accelerate explosively at amazing bursts of speed, but like all cats, they could only run over a short distance as they were not built for long chases. Unless they got close, they didn't stand a chance. Even one false move and they would have to start all over again.

Once they charged at their prey, Smilodon erupted out of the grass. The lead female drove the prey towards the other females. Surprisingly, as the females fought to restrain their prey, they did not use their infamous teeth, in case they break them. First, they worked together to pin down the struggling animal under the weight of their bodies. Smilodon killed its prey by using its immense strength to pin its prey down before crushing its prey's throat with its saber-teeth. Only when the prey is totally subdued are the famous sabers drawn.

Like some modern-day species of large cats, Smilodon would gnaw on the bones of their prey. But when fighting against more capable and defensive prey or opponents, Smilodon would instead go into an extremely wild, uncontrolled, dangerous and unpredictable battle frenzy; madly slashing at the opponent with its claws, and lashing out at anything else in its way that got too close. 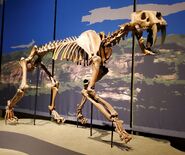 S. fatales hunting
Add a photo to this gallery

Retrieved from "https://prehistoric-earth-a-natural-history.fandom.com/wiki/Smilodon?oldid=23759"
Community content is available under CC-BY-SA unless otherwise noted.